Some recent figures released by the Department for Communities and Local Government (DCLG) on land values reveal an interesting, and shocking, picture of the state of the country’s residential land market. 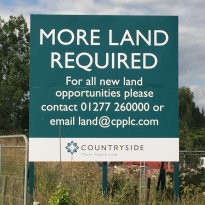 s this staggering level of uplift matched anywhere else in the world?

Looking across the country there are huge variations in residential values, ranging from £370,000 per hectare in places like Bolsover, Bassetlaw and Fenland to £100.25m in the City of London – 270 times more. Yet Fenland is only 70 miles north of the City of London. Values in London boroughs range from £91.1m in Kensington & Chelsea to £8m per hectare in Barking.

Of course, there are various assumptions and caveats made in these estimates about the scale of residential development on a typical site (269 units in London and 35 outside London), the absence of affordable housing (which is increasingly the case in any event!) and the absence of the Community Infrastructure Levy (CIL). But 35 units per hectare is low when you consider high-density developments being built in places like Cambridge and Oxford, so the land value assumptions will be on the low side. It’s also worth noting that places with a tight green belt have much higher values than their neighbouring districts.

In a brilliant 1909 speech, Winston Churchill described land as ‘..by far the greatest of monopolies…the original source of all wealth, which is strictly limited in extent, which is fixed in geographical position.’ It’s quite a long speech and I recommend that you read it, but consider this section, (which I have shortened slightly), where he describes the lucky land owner ‘…who happens to own a plot of land on the outskirts of a great city, who watches the busy population around him making the city larger, richer, more convenient, more famous every day, and all the while sits still and does nothing. Roads are made, streets are made, services are improved, electric light turns night into day, water is brought from reservoirs a hundred miles off in the mountains — and all the while the landlord sits still.

‘Every one of those improvements is effected by the labour and cost of other people and the taxpayers. To not one of those improvements does the land monopolist… contribute, and yet by every one of them the value of his land is enhanced. He renders no service to the community, he contributes nothing to the general welfare, he contributes nothing to the process from which his own enrichment is derived… At last the land becomes ripe for sale – that means that the price is too tempting to be resisted any longer. And then, and not until then, it is sold by the yard or by the inch at 10 times, or 20 times, or even 50 times its agricultural value.’

Could Churchill ever have imagined that land would one day be selling not for 50 times its agricultural value but 4,773 times its agricultural value? For that is the difference between a hectare of agricultural land at £21,000 and a hectare of residential land at £100m in the City of London. Our planning system has created this mess and the situation is considerably worse than it was in 1909 when Churchill made his speech. It would be interesting to know if viability assessments take an historical view of land ownership, looking at the original price paid for land and the year-by-year profits that have accrued. As I’ve written before, I doubt that local authorities have the expertise to handle the calculations involved, even though the granting of planning permission represents an automatic and massive transfer of wealth to developers.